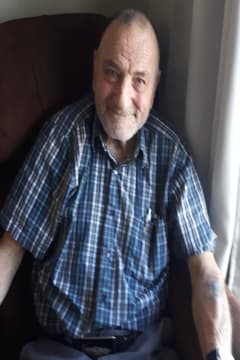 Roger was very well known for his unique sense of humor, always teasing people and he absolutely loved going to the Northside IGA and to the North Safeway Pharmacy once or twice a week to banter back and forth with the staff there. He was a trucker by trade and did it well and with great pride for many years.

Roger moved to Grande Prairie in the late 70’s and it was only a few years later he would meet and marry the love of his life, Marion. They spent many years camping and fishing, bowling, bingo and playing cards until Marion sadly passed away in 2017.

Roger has left behind a big family who loved him dearly and he spent many hours with his grandchildren and great grandchildren who were the true joy of his life.

He was predeceased by Marion, his wife of 37 years, his parents Wilfred and Ruth Bailey, his sisters Gloria, Peggy and Sally and his brother Donald.

We will be holding a celebration of Roger’s life at a later date and he and Marion’s ashes will be interred together into the Webster Cemetery at that time.

Fly high with the Angels Roger, and we miss and love you dearly.

So very sorry to hear of Poppy Rogers passing. He was a wonderful man to our family. I ran into Roger a couple of years ago while he was camping and we were just picnicking and he joined us for the day. It was so nice to have spent that day with him. I remember him letting the kids tattoo his belly and arms with felt pens. I know he made a difference in many lives. Love you Poppy!!!
- Wendy Parent