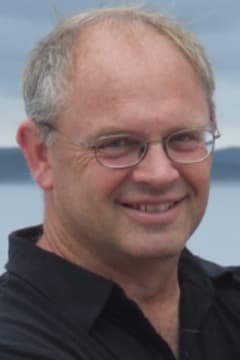 Sept. 7, 1955 – Oct. 24, 2020
With heavy hearts we mournfully announce the passing of Roger Douglas Ungstad. After a hard fought battle with cancer he passed peacefully with family by his side on October 24, 2020. Roger was a dedicated husband, father, grandfather, and friend. His kind and gentle demeanour, humour, and sharp wit will be missed by all those who were lucky enough to know him.
Roger was born in Grande Prairie in 1955. He spent his early years living on the family farm near Goodwin. After the death of his father, the family moved into Grande Prairie. Roger worked as an electronic technician and tech supervisor for the Department of Transportation / Nav Canada airports for close to 35 years. He then started the career he loved, being Grandpa and babysitter to his grandchildren when Eric and Joanna were at work.
Roger is survived by his wife Charlene and his three children Ian, Eric (Joanna), and Andrea (Jonathan). He cherished time spent with his grandchildren Mya, Hannah, and Eli. Family was very important to Roger and he always enjoyed getting together with his brothers David (Edie), Steven (Shelly) and their families. He was blessed to have many close friends who will miss camping with him, the crib games, and his famous Christmas letters that were always written from his heart.
Roger was predeceased by his father Gerald Ungstad and his mother Edith Tenborg, and step-father Maurice Tenborg.
Roger was a humble man and wished to forgo a funeral or celebration of life. His family will gather and hold a private ceremony in the spring at the Goodwin Cemetery. No charity has been named in memory; friends are welcome to donate to a charity of their choice, if they so wish.
Care entrusted to Bear Creek Funeral Home 780 830 7742 www.bearcreekfuneral.com

To Charlene and Family - My deepest sympathy on the passing of Roger. I had the pleasure of working with Roger many times over the years, and was always impressed with his honesty, work ethic, and his sensitivity. He was always a pleasure to work with, and I am sure he will be sadly missed.
- Don Reynolds
My sincere condolences on the passing of Roger. I knew him thru work with Transport/Nav Canada.He was a great guy and I'm sure will be sadly missed.
- Dave Hookham
We are saddened to learn of Rogeer's passing and offer our condolences to Roger's family. I worked with Roger in Grande Prairie for 10 years before transferring to Edmonton. I found Roger to be a trusted and loyal friend.
- Patrick Hudson
Dear Charlene: Please accept my heartfelt sympathy on your loss. My thoughts and prayers are with you during this difficult time. Sincerely, Lorna Nordhagen
- Lorna Nordhagen
Charlene, my condolences to you and the rest of the family. I remember running around the theatre with Roger and Rover when we'd help help out Grandma Henry in the summer time.
- Patricia Henry
Charlene and Family, so very sorry to hear of Roger's passing. I was just thinking about Roger today and remembering all the laughter we shared working together at Transport/Nav Canada. Our thoughts and prayers are with you all at this very difficult time. Jacki & Dale Gobin
- Jacki Gobin
My condolences to you Charlene and the family Roger was one of the brightest kids in are class, he had such a terrific sense of humor and will be missed by all that knew him.
- Barry Smith
I am sending my deepest condolences to Charlene,Ian,Eric, and Andrea. Roger was one of the kindest men I have ever met. I will cherish all the memories. Love and Hugs.
- Shaun Alden
My deepest condolences to charlene and family. I worked with Roger for many years at yqu. He was a kind and thougtful colleague. RIP
- Peter Dyck
To Charlene & family,David, Steve & families my deepest sympathy to you all.
- Levola Sedore
Dear Charlene and family, sending my deepest sympathy during this most difficult time.
- Isabelle DeVries
Sending the family our condolences your in our prayers . Love from Ernie Sedore and Tracy & Gary Downes and family
- Tracy Downes