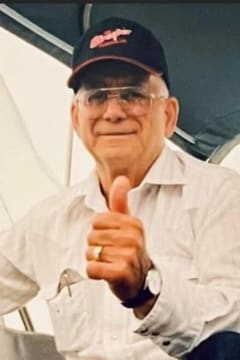 It is with heavy hearts that we announce the passing of our father, Ronald Jerome Mayne of Clairmont Alberta on March 21, 2021 at the age of 87 years. He was born to parents Garfield and Mabel Mayne, on October 10, 1933, in Camrose AB. His beloved sister Carol joined the family on April 6th, 1939. Ron married Marita Franks on January 11th 1954 and together they had six children. Ron is survived by longtime partner Joyce Loskill-Davis, his children; Darrell (Donna), Garry (Trudy), Randy (Diana), Candice (Casey Carpenter), Darcy (Natalie) Mayne as well as Marita Mayne, niece Beverly Fahlman and nephews Greg & Doug Fahlman and his many grandchildren, great grandchildren & great great grandchildren. He is predeceased by daughter Debbie (at birth), Garfield & Mabel Mayne and his sister Carol (Fahlman).

As a young man Ron was a risk taker and had many adventures including being a jockey at the age of 13, Roman Standing horse racing & stock car racing. He enjoyed sports throughout his life including hockey, curling, golf and fishing.

He changed careers many times; Professional Truck Driver, Car Salesman, Hunting Guide for American tourists and Farmer. Ron and Marita purchased the Grande Prairie Shell Bulk Plant in 1974 and made it a very successful business. After his first bout of cancer Ron stepped away from the business and bought a farm near Clairmont and that became his passion. He loved working with his thoroughbred horses and watching them compete and spent the next 40+ years enjoying farming, gardening, family and socializing over coffee with his many friends.

Dad will be sorely missed for many reasons including his unique sense of humor, bad Dad jokes and of course his homemade pickles.

At Ron’s request there will not be a funeral service.

Uncle Ron was always my favorite, The many fond memories visiting the Mayne family farm will always hold a special place in my heart.. Rest in Peace Uncle and much love to the Mayne family and friends.
- Rhonda Olson

So sorry to hear of your Dad's passing.As his cousin I knew him well especially in his early days.He was definitely a one of a kind guy who marched to his own drummer a quality I always admired.He was a horse guy that delighted in getting in the saddle than causing the horse to run away with me holding on for fear life.Something told me to phone him recently and when I did was told that the ambulance had taken him an hour before my call.I am sorry I missed him as I will always.
- Bryan Edmundson
Truly sorry to hear about your Dad..He was always such a nice man and you are right..he have bad Dad jokes..lol..Love to you all during this time of grief and loss..he will be missed by everyone who knew..
- Heather Carpenter

MY heart goes out to all of Uncle Ronnie's family and friends. He lead a very interesting and contented life. Uncle Ronnie is defined by so many great qualities including his integrity and honor. He as from the era were his word and handshake were his bond. He was also a humble yet a very proud man and of course his sense of humor is legendary including his bad jokes that were so bad they were actually really funny! Uncle Ronnie will be greatly missed by so many. I'm so grateful for all the great memories he left me.
- BEVERLY FAHLMAN

To The Mayne Families We are so sorry to hear of your great loss. It is always so hard to lose someone so special. We know all the fond memories will help to ease the pain overtime. Our thoughts are with you all. Danny and Janice Dorscheid
- Danny & Janice Dorscheid

Sincere sympathy to all Ronnie's family and loved ones. May time ease the pain and sorrow and may all your memories bring peace and comfort. Ray & Barb Newman
- Barbara Newman

So sorry to hear about Ron's passing. He was just such a great man , always smiling and cheerful. He will be missed
- Natasha Sklarchuk
To all of Ron's Family and friends, our deepest condolences in your loss of Ron. Your summary of his life in his obituary shows he had an interesting and enjoyable life, filled with lots of fun. He is leaving you all with lots of great memories.
- Don & Donna McNally

Sincere sympathy to Ronnie's family and loved ones. May time help to ease the pain and sorrow and May all your memories bring peace and comfort. Ray & Barb Newman
- Barbara Newman
To: The Mayne Family Fr: Cherryl MacSweyn I am so deeply sorry for your loss
- Cherryl MacSweyn
RIP Ronnie Mayne. We had so much fun at the race track. It was a pleasure being your friend and riding your horses. My all time favourite memory of you is the time you jumped on and galloped a race horse in GP, well after your riding days were over. You couldn't resist. Lol. That's probably the last race horse you rode, but you sure looked good on her until your legs gave out! It's all about the heart, and you had a big one. Enjoy your visit with Dug and Dave.
- holly crichton