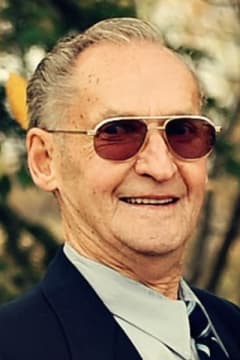 Roy married Carol Coates December 14, 1956 and together their family lived in Berwyn, Alberta. In Berwyn, Roy was an automotive mechanic at the General Motors dealership. In 1964 they relocated to Grande Prairie. While in Grande Prairie, Roy was a teacher the Composite high school, and taught automotive, welding, and mathematics until his retirement in 1992.
After retirement, Roy enjoyed spending time woodworking, fishing, hunting, and making wine. Over the last few years he enjoyed re-building computers and spending time with his beloved dog Pyper.

Roy was predeceased by his parents Carl Persson and Sally Persson (nee: Olofsson); Brothers: David Persson, Lewis Persson, Rod Persson, Perry Persson and stepmother Louisa Persson.
We would like to thank the doctors and nurses at the QEII hospital on 3N and in the ICU department; specifically Dr Ayanrino, nurses: Kristen, Jen, Lori, Joanne and Brittany, as well as the RT department for all their kind words and help during this difficult time.

A Funeral Service will be held on February 24, 2020, at 1:00pm at Bear Creek Funeral Home, 11802 99 Avenue, Grande Prairie. A private family interment to follow at Emerson Trail Cemetery.

In lieu of flowers, memorial donations may be made to a charity of one’s choice.

I was so sorry to read about the passing of your Dad, Grandpa and Great Grandpa. I am sure you have many great memories to help comfort you at this time. Hugs to all of you. Jude & Don Morgan & family Nolan & Janet Frederick & families.
- na
Cindy, Derry, Tim & families, so sorry to hear of Uncle Roy's passing. Thinking of you all. Penny ( Persson) Brown
- na
My thought and prayers Cindy, David and your families. Dianne & Ray Laurin
- na
We are sorry to hear about Roy. Our sympathy to the whole family. Phil and Judy Barber
- na
Our sincere condolences to the family on your loss of Roy. He will be missed... Larry & Debbie Sparks
- na
My deepest Condolences to Roy Family . Between Roy and Les in a 1 1/2 of Automotive of 12 , 22 and 32 i Learnt a lot of Mechanics and Welding , A Big Help in my many years Heavy Equipment Contracting ! Dale Delaney
- na
Our sincere condolences to the family on your loss of Roy. Our thoughts are with you. Chuck & Audrey Fowler
- na