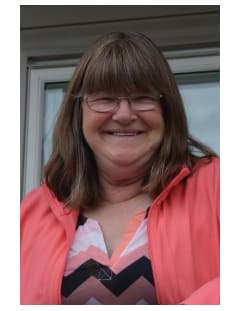 Sheena passed away peacefully with her daughters by her side on March 28, 2020 at the age of 64.

Sheena was someone that you could always count on, she created lasting friendships with those around her and never turned her back on anyone. She was independent, strong, and resilient. She raised four children as a single parent and played a large role in raising her grandson Matteo, with whom she had an undeniable bond. Sheena also had a second family in her friends and coworkers at Home Depot, where she worked for many years.

She was a dedicated Oilers fan, whether they were winning or losing Sheena was cheering them on. Despite being diagnosed with breast cancer, Sheena was able to celebrate when the Oilers played that night in the Stanley Cup playoffs. The sounds of hockey were the sounds of the Peters’ home.

She was predeceased by her mother Helen Bean, and father William Reay along with many other family members.

A Celebration of Sheena’s life will take place on Saturday, June 20, 2020 from 1-4 pm at 4647 93 Street, Grande Prairie. Bring a lawn chair and come share some of your favourite memories of Sheena with her family.

An interment of ashes will take place at a later date.

Rest in Paradise Sheena
- Frances Hosker
Rest easy my dear heart sister! You and I chose a long time ago to be sisters, we have supported oneanother through many hard times and many good times, you have always been strong and steady! You are very loved and will forever live in my heart!
- Lori Tremblay
Sheena was like a 2nd mom to me and spent alot of time at her house with her boys and we always had a blast and awsome fires u will be deeply missed sheena
- Ian watson