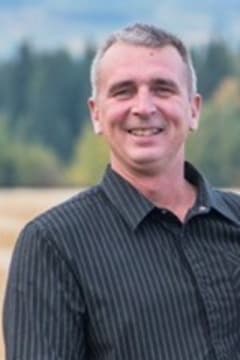 We are saddened to announce the unexpected passing of our beloved son, brother, husband, uncle, father and friend to heart disease on Sunday, February 23, 2020 at 46 years of age in his sandbox doing what he loved.

His journey began in North Battleford, Saskatchewan on August 19, 1973 when Jerry and Donna Schmaltz proudly welcomed their first son. He was followed by sister Bernadette in 1976, brother Jason in 1979 and baby sister Leslie in 1980. Together they grew up on the farm in Spiritwood, Saskatchewan surrounded by loving Aunts, Uncles and cousins. The family enjoyed working together on the farm, horseback riding, fishing, playing durak or rookie and spending time with their vast extended family.

In 1989 with the family heading out to BC for a new adventure, Sheldon at 16 years old ended up in the
work force trying out outfitting, oil hauling, construction, and various other opportunities before settling
into the drilling rigs where he spent 20 years working all over Northern Alberta, BC and Saskatchewan
meeting thousands of people and making almost as many friends. During this time, Sheldon met Wendy Weber a shy naive 18 year old and this would be the first day of a 24 year adventure.

Sheldon and Wendy first moved to Grande Prairie where she attended University and Sheldon continued his career in the oilfield. They were married on May 22, 1999.

One night after a few beers with a family friend, Sheldon decided to try his hand at farming again and never looked back. Starting in 2001 with 10 heifers and a rented half section, Sheldon was hooked. In 2003 the Schmaltz farm was established and continued to grow until he was farming thousands of acres and had hundreds of cows. Sheldon was a jack of all trades and amazed us all with what he could accomplish. His work ethic was hard to keep up with.

In 2003 on 30th birthday Sheldon welcomed the first of his three most prided accomplishments his son
Shon, two years later came daughter Lexi and two years after that another daughter Ashley. Sheldon’s
family was his whole world, riding horses, quads or sleds, working with the cows, farming and anything
else was always done together. Sheldon had a world of knowledge he was sharing with his children and
anyone else who was around. Every summer and Christmas and any other time that he could convince
them Sheldon loved to have his family especially nieces and nephews out to enjoy his world. Many happy memories were made on Schmaltz Acres.

A celebration of life will be held in the Worsley School Gym on Thursday, March 5th at 2pm.

Memorial donations can be made to the Worsley Central School Sports Program or the Montagneuse 4-H Multi Club.

So sorry to hear of your loss Wendy. Sheldon was a special guy. My prayers are with you, your children and all Sheldon's family. Marlene and Allen Maxwell
- na
So sorry for your loss Wendy sending my deepest condolences to you and your Renee Sawchuk
- na
What beautiful memories he left behind, his goodness will be missed by all that knew him. Stay strong and know we are standing beside you. Our deepest condolences and prayers are sent to you and your family.. love Sheila and family
- na
My condolences to Donna, Wendy and families on the loss of Sheldon. Sheldon one of a kind. Such a loss to all who knew him. Sincerely, Carol Buchan
- na
My deepest condolences to Wendy, her 3 wonderful children & everybody else who was lucky enough to have had Sheldon cross paths with them! I was lucky enough to be a part of Wendy & Sheldon lives while going to college in Grande Prairie back in the 90s. Sheldon wore a smile on a daily basis & his laughter filled the room! It was Never a Dull Moment when he was around! Sheldon was a go getter from the moment I met him. He made his dreams come true! Sheldon married Wendy, the love of his life, then moved out to Worsley starting his dreams of being done with the oil patch & becoming a farmer so he could stay home to watch his family grow & be there for all those special moments! Sheldon didn't have near enough time for those moments but the time he did have he made it count! He loved his family so very much as they were his entire world! Sheldon will be missed just as much as he was their entire world too! Biggest hugs to all & hope you find the strength needed to go on thru this most difficult time! Laura Rutherford
- na