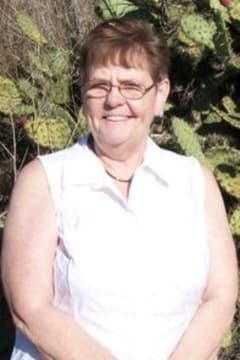 Terry was born in Fredericton, New Brunswick to Horace and Marguerite O'Leary she spent her early years in New Brunswick and in the late 1950's the family moved to Southern Ontario settling there and making it their home. Terry's parents started up a boarding house and in the early 60's this is where she met her future husband Lorne (Buzz) McNutt.

On April 4th, 1964, they got married and began their adventures in life together, they bought themselves a little farm in Canfield and started their family, 2 daughters: Leanne and Lori. They moved to a few other farms around the area in Ontario but eventually made their trek west to Alberta to make a better life for their little family. First stop was Vermillion but finally settling in Clairmont that had been their home for 41 years.

Terry worked a few jobs when they first got to the area but eventually, Along with Tom and Rena Mazerolle they started a secondhand store and household auction. From there on they had a secondhand store until Lorne retired. Terry being not one to sit still worked at a local hotel until she retired in December 2019.

Travel was a passion for both of them, trips to Mexico, Vegas and Cuba were some of her favorites. Her trip to the UK, she couldn't say enough about and she loved her California vacation too and was talking about going again soon. She loved hitting the road in their RV whether it was on their own or with friends, they drove across Canada a couple of times, and up to Alaska. Camping was a must just about every weekend, she loved the outdoors and fishing.

Terry was very much a volunteer, she liked being involved in her community and events around the region. The Canada Winter Games, over 20 years in the VIP area of Bud Country, The Clairmont Ag Society, making little blankets and hats for preemies at the hospital, the list goes on. She was someone you could depend on and she was very passionate about her volunteer ventures.

Terry had a heart of gold as most people who got to know her can attest to, Terry seems to have extra "kids" all the time from Leanne and Lori's friends and then Krystine and Taylor's friends she was "mom" and "nanny" to them all and all who knew her will miss her.

A celebration of Terry’s life will be held on Saturday August 7th, 2021 at 1pm at Bear Creek Funeral Home (11802 99 Avenue in Grande Prairie, Alberta). For those unable to attend, a livestream link will be available below.