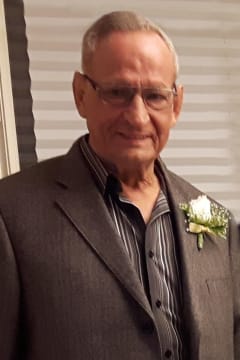 It is with heavy hearts that we announce the passing of Ted Halwa, our loving husband, father, and grandfather, on September 29, 2022, at the age of 85 years. Ted passed away in the Enhanced Care Unit at Mackenzie Place.

Ted took over the family farm in the early 1960’s and married Iris Haugli on November 12, 1966 at St. Joseph’s Catholic Church. He and Iris remained on the farm until 2012, when they moved into the City Grande Prairie.

Ted was a member of the Knights of Columbus along with many other positions within the church and also the farming community. He also enjoyed a variety of activities such as curling, traveling, woodworking, restoring antique tractors, going to auctions, and gardening. Ted embraced his family and local community.

We would like to say thank you to all the staff and caregivers at the Enhanced Care Unit in Mackenzie Place for all their hard work and devotion to Ted. It really meant a lot to all of us.

A Prayer Service will be held in memory of Ted on Thursday, October 6, 2022, at 6:00 pm, at Bear Creek Funeral Home, 11802-99 Ave, Grande Prairie. A Funeral Service will be held the following day, on Friday, October 7, 2022, at 10:00 am, at St. Joseph Roman Catholic Church, 10404-102 Street, Grande Prairie. We invite everyone to the reception in Tranquille Hall following the Funeral Service. Interment will be at a later date.

Click the Livestream link below to take part in Ted's service:

If anyone wishes to make a donation in Ted’s name, we suggest the following organizations: