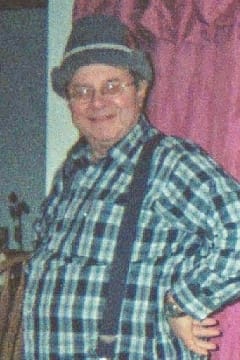 Allen Dyck died at the age of 88 years on Wednesday, August 19, 2021, with his immediate family by his bedside. He had been admitted to the QEII Hospital a week earlier with breathing difficulties, and eventually died in the ICU. Allen's affirmative faith in a life after death, grounded on his extensive reading of the teachings of Emanuel Swedenborg on this reality, made saying good-bye much easier.

He is survived by his wife of the last 49 years Georgina, their daughter Sandra and her two daughters Valerie and Vanessa who are mothers to three of Allen’s great-grandchildren. With his marriage to Georgina, Allen became the adoptive father to Georgina's two beautiful girls, DeAnna and Carrie who are mothers to four more great-grandchildren. Surviving siblings to Allen are his brother Norman of Grande Prairie and younger sister Donna Vath of Williams Lake BC.

Allen was pre-deceased by his parents Bill Dyck (William) and Lena Dyck (Reddekopp), and his sister Margie Pardue of Red Deer.

While still single, Allen taught school in several small rural communities not far from the Hamlet of Sunnyslope where he was born and raised. Some of Allen's earlier teaching positions included that of school principal.

He was raised on a farm by a father with renowned mechanical skills, Allen hankered for his own farm and left teaching to take up his homestead near Grande Prairie with brother Norman. Allen had homesteaded and farmed north of Debolt (Puskwaskau) since the early 1970's.

Allen, like his father, became noted for his mostly successful skills at repairing some small, and a few larger farm tractor engines for neighbors. His flock of laying hens added to the family income. Putting his earlier teaching career skills to good use, he tutored several area children in upgrading their math and English.

At times Allen could wax philosophical on his farming fortunes with an adage and some humor. He would ask rhetorically, “Do you know how to make a small fortune farming? ... well, you will need to start out with a big one!”

The family would like to extend their appreciation to the staff of the QEII Hospital in making Allen comfortable at the time of his passing.

Tentatively, a Memorial Service is planned for mid-October, at the former Debolt United Church with Rev. Michael Cowley of Olivet New Church (Swedenborgian) from Toronto officiating.

The family would like to extend our appreciation to Bear Creek Funeral Home of Grande Prairie for their care in this time of our families need.