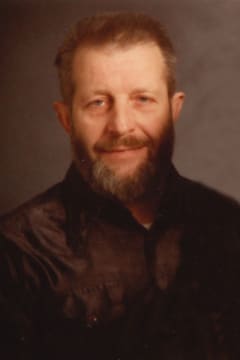 After a long illness, Bud passed peacefully in his sleep at the Grande Prairie Care Centre with his daughter Kathy at his side. He is survived by his wife of 64 years, Carol. Sons; Daniel (Patricia), Gerald (Kimberley), James (Colleen) and daughters; Kathleen and Jeanne (Larry) Semeniuk, son in law Orvel Isaac, sister Marie Hodges as well as 13 grandchildren, 12 great grandchildren and 2 great, great grandchildren as well as numerous nieces and nephews.

He was born near Flint, Michigan. At 17 he enlisted in the Navy and after 3 years of serving his country was honorably discharged. He worked for a time with the railroad and fixed diesel locomotives. He became a mechanic at a GM Dealership in Flint. When Bud met Carol, he was the father of a 5-year-old daughter, Sandy. He married Carol in 1956. While in Michigan, they had Danny and Kathy, they then moved to Pasadena, Texas where Gerry and the twins Jack and Jeanne were born.

In 1962 they decided to move to northern Alberta, Canada. They converted the back seat of a Packard to become the crib for the twins and also converted a milk wagon van into a camper. They eventually homesteaded land in the Webster area where Rose and Jim were born. Bud was known for his mechanical abilities and having an airstrip in the back yard. In 1988 Bud was badly injured in an automobile accident which left him nearly blind. He continued working on vehicles and woodwork for many years after he recovered and was an inspiration to us all.

Bud’s family wishes to thank the Grande Prairie Care Centre for their special care of him over the last year and a half.

There will be a celebration of life at a later date when we can all be together. A small private gathering (by invitation) will take place on Friday May 8, 2020 at 1:00pm. For those of you who wish to join the family virtually, may do so by visiting the Bear Creek Funeral Home YouTube page at https://www.youtube.com/channel/UCQuYjCJhzsvz5NOdsXTUXvw

In lieu of flowers you can donate to the CNIB (www.cnib.ca).

Deepest condolences to Carol & family. Bud was an incredible & genuine caring person with quite the sense of humour; a good person through & through. Big hugs
- Marie Kulicki
Carol and family, so sorry to read about bud this morning i am so glad that i at least got to meet him and sandy's. hugs and love to you all
- connie
My favorite memory of My uncle was an airplane ride in Ironwood one summer . He was such an amazing man that I was always fascinated by . Love you all
- Annie
Our condolence to you and family Carol.My husband Bill was very fond of Bud.Such a wonderful human being.
- Bertha Wirch
I'm so very sorry that I never had the opportunity to meet him and tell him what a fine man he was for raising Sandy.
- Jayne Martin