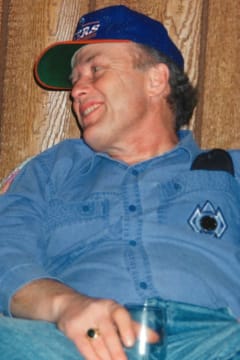 Wayne snuck away from those who loved him the most, with the beautiful sunrise on September 28, 2022, in Grande Prairie, AB. He was born in Winnipeg, MB on May 28, 1943, to Thomas Hodgson and Irene Hodgson (Eyjolfson). His sister Linda joined the Hodgson family six years later.

In his youth, Wayne attended Gordon Bell High School, the University of Manitoba, and the Manitoba Institute of Technology (Red River College) graduating with a diploma in Civil Engineering Technology. On May 28, 1971, his birthday, while working in Eriksdale, MB, he met Wilma Lynne Pottinger and thus began the Saga of ‘Jesus Wil’ and ‘My God Wayne’. Marrying on January 5, 1973, it was a saga that lasted over 49 years and grew to include their three children and three grandsons.

Most of Wayne’s career, which began in Manitoba and carried on in Grande Prairie, AB, was spent overseeing highway construction as a project manager and consultant. He thoroughly enjoyed going to work and never complained about long hours as he got to know the backroads, people, and communities of the Peace Country.

Those who knew Wayne know of his love for wearing holey old jeans, plaid flannel shirts, faded ball caps, and two pairs of woollies even in the summer. Music, Raptors, Steelers, skiing, hockey, frisbee, chess, reading fiction and the newspaper, road trips with Wilma, and of course his kids, were what he loved most, not necessarily in that order. In turn, his children count his passions and what he taught them as what they love the most and will forever miss sharing with him.

Wayne was predeceased by his father Tommy, mother Irene, and sister Linda Ritchie. Surviving and missing Wayne is his wife, Wilma of Grande Prairie, AB, daughter Merion of Calgary, AB, son Caleb and grandsons Alijah and Jesse of Camrose, AB, son Delaney of Grande Prairie, AB, and grandson Arlen of Beaumont, AB. He is also survived by his aunt Val Taylor of Winnipeg, MB, and all the Eyjolfson clan, each of whom were special to him; his dear brother-in-law John Marvin Pottinger and sister-in-law Lorraine Pottinger of Winnipeg, MB; lifelong friends Barb and Harvey Sigurdson and family of Calgary, AB; sisters’-in-law Rita, Bernice, and Hanna; and numerous nieces and nephews who were all loved by Wayne. He also held a special place in his heart for Tara and Kathy, the mothers of his grandsons.

As per Wayne’s wishes, cremation has taken place and there will not be a funeral. Donations may be made to a charity of one’s choice.