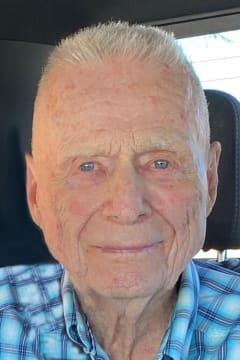 It is with profound sadness that we announce the passing of our Forever Cherished Wawa.

Dad was born in Hamiota, MB, the third of eight children and the oldest boy. He worked hard on the farm until the age of 16 when he then ran away to join the army, only to have his Mother drag him home by his ear, and when he turned 17, he returned and was then accepted by the Military. He served as a Private, in the Military Police, from 1943 – 1946. He was proudly in charge of all the prisoners. The oldest WWII Veteran in Fox Creek.

Dad met Mom in 1946 and married in 1948 -This was the beginning of the Greatest Luv Story Ever!

He held several careers: Firefighter with the Manitoba Fire Department, Maytag Repairman, Square M Construction, and Halbert’s Crane. In 1969-1971 he joined Stearn’s and Roger’s and built the Cochrane and Black Diamond gas plants. We moved to Fox Creek in 1971, for a six-month job, where he started his own company, Greig’s Crane Service. He built several bridges all over Alberta and BC and all the way to Alaska. As well as several projects with the gas plants. Dad retired at 72 years of age and went on to manage the landfill site and run light towers for Alberta Safety. He worked up until he was 88 years old. He could operate any and all equipment, great carpenter, built several projects over the years, around the house and for friends and family.

He attended Culinary school after the army and was an incredible cook – All of the males in the family had rivalries to decipher who was the best.

Very well known for being a great community leader, with and for all the organizations in Fox Creek. He cooked, carved, and supported them all.

Dad was an original Fox Creek Branch Charter member who helped form Branch #280. He served as President, Past President, Color Party, and marched/paraded well into his 90’s. Always supporting his Scottish heritage.

He was an avid golfer and curler – where he got his nickname ‘Grizzly’ – He was always the first one up, didn’t matter what time he went to bed, and made sure everyone was up to hit the ice at 6am. Made for some very unhappy partiers!

Dad enjoyed touring Canada and the USA(in his motorhome) taking part in all or any rodeos. He is very well known for his bolo’s, buckles, and hat, and always smelled amazing.

Roses were his favorite. He grew them every year and won several competitions. Luved to dance – and was Majestic. Watching my Parents dance is a memory that people will never forget. He taught us all of waltzes, the Fox Trot, Two Step, and could he Step Dance, but our favorite was the Old Time Waltz … He glided across the dance floor, and us girls never passed on the opportunity to do the Highland Schottische with him. His luv of music was heartwarming, his favorites were the bagpipes and the fiddle(Every Sunday morning!)

We are surrounded by antiques, and rocks of all shapes and sizes. Rock picking was always a joy, and he carried a flat smooth rock in his pocket every day. He thoroughly enjoyed sitting out in the yard admiring all of his treasures.

Dad had So Much Class and his Luv for Family was Incredible … He was Deeply Devoted, Compassionate, Kind, Sentimental, Loyal, Caring, Luving, Fun, Considerate, Charming, and a wee bit Sassy.

We all miss this Gentle Giant, Immensely.

Please join our family in a Special Tribute to this Amazing Man:+

Donations may be made to any AB Veterans Funds, AB Children’s Hospitals and Fox Creek Healthcare Centre.