Pet Loss: “One of the Family” 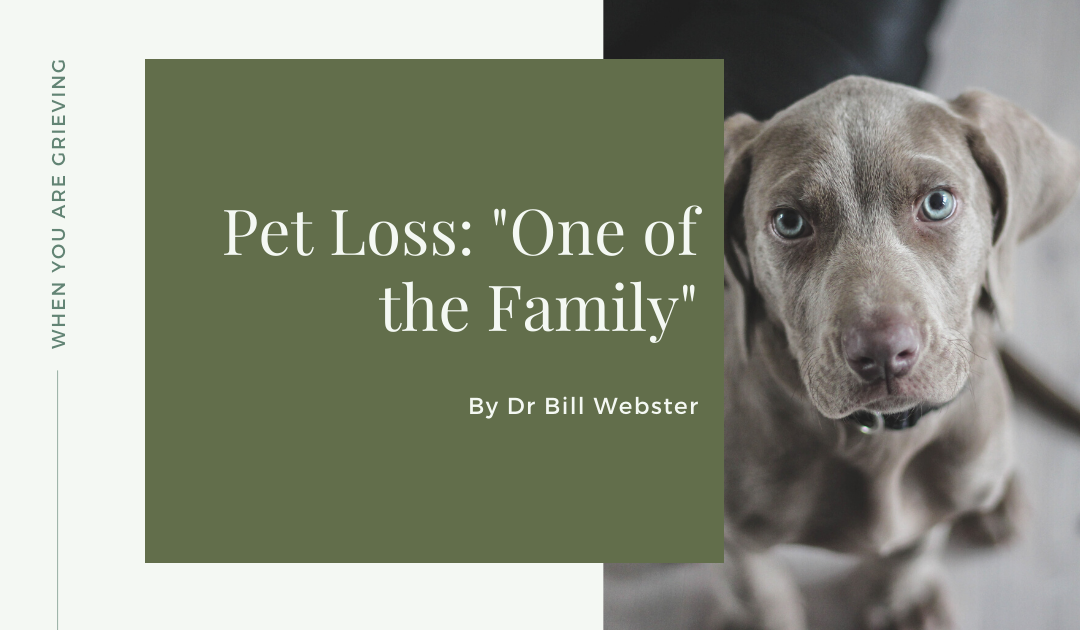 Marian was devastated by the loss of her husband Bob 2 years ago. She wondered if she would even survive the loss, but she persevered, worked through her grief and was at the point where she was beginning to rediscover herself, reconcile her loss and reconstruct her life.

Then, this past summer, another family member got sick. In spite of heroic treatment with constant care and attention, they finally died.

No, it was not a child, parent, sibling or relative.Marian lost her cat!

For those who have never had a companion animal, pet loss is often hard to understand. “After all,” many say, “it was just a cat … or a dog, bunny rabbit, hamster, budgie or any one of many possibilities.” Pet loss is often overlooked by society, so when an animal dies, owners grieve alone because they are afraid that they will be ridiculed, or thought to be crazy or stupid, because, after all it is “only a pet”.

“One of the Family”

But for Marian, Pebbles was “one of the family”. This loss has been just as devastating to her as the death of her husband, probably complicated by the fact that she was “their” cat, and Pebbles death cuts one more string that connected her to Bob. Perhaps the loss of an animal is made more difficult because there is a lack of understanding of how significant this relationship can be, leading to little sympathy from those around.

In fact, within a week of Pebbles death, a neighbour showed up at the door with a new kitten for Marian, which she politely refused to accept, still too hurt from her loss to be able to invest in another relationship. She managed a wry smile as she told me about it. “Too bad they didn’t bring over some younger guy to replace BOB when he died”, she retorted, and the chuckle we shared helped put it in perspective.

In case you haven’t noticed, the Pet Industry is big business these days.

Report Buyer, a UK based online destination for business intelligence, has now added a new market report titled “The Pet Industry” which predicts that last year, North Americans will spend over $43 BILLION (£25 BILLION) on pet supplies and services, and that pet owners in the UK are fast catching up with their North American friends when it comes to spending money on their pets.  Pet food is the largest segment accounting for 42% of the total market. But non-food pet supplies such as litter, toys and over-the-counter medicines are the fastest-growing segment of the market. Stores in the UK are increasingly responding to the growing trend of the “humanization” of pets by providing accessories and products beyond leads and water bowls. A buyer for a major national chain recently stated that the response to the store’s new pet boutique has been “absolutely phenomenal”. Animal hospitals, and pet cemeteries are also growing exponentially, and cremation urns and other funeral paraphernalia is becoming big business.

And so, not surprisingly, grief counselors for pet loss are emerging. The loss of any relationship can cause intense pain, and even if others may not understand, a pet is often a significant and constant part of your life. Pebbles provided Marian a source of comfort and companionship, unconditional love and acceptance, and even fun and joy after Bob’s death. Little wonder she was devastated by the loss of that relationship.

While there are many common factors in grief over any relationship, there are issues that are unique to the situation that often trouble the grieving pet lover.

A major issue is guilt, especially in those frequent situations where the pet owner had to decide to euthanize the animal or where the cat was killed by a speeding car or a veterinarian treatment was unsuccessful. In Marian’s case, she spent an extraordinary amount on treatments hoping to give the cat a few extra years of life, and her some more time with her pet.

But after 8 months, she saw the writing on the wall. Vets may be the best judge of physical condition, but Marian was the best judge of her beloved pet’s quality of daily life. Seeing the constant pain, as well as having to undergo difficult and stressful treatments that didn’t seem to be helping, as well as Pebbles general lack of interest in life, Marian chose to end her beloved companion’s suffering, and the vet concurred.

Marian courageously insisted on being with Pebbles to the end, needing to see the cat passing peacefully and without pain. She spent some time with her beforehand, and continued to stroke and comfort her while the procedure was administered, and remained for some time after the cat had died. Many veterinary offices have developed a very sensitive and caring process for the procedure which is sometimes done in an office, in the person’s home, or even on occasion in a person’s car.

Then there was a decision about what to do with the remains. As with a human death, there are many options. Some alternatives are to leave the pet at the vet’s for disposal; to bury the animal at home (although city regulations often prohibit this, and it can be difficult if the person moves after a while); pet cemeteries provide dignity, security and permanence at a cost; cremation is less expensive and provides many options to handle the ashes, again at a cost, including urns, jewellery, etc. If you didn’t know it, folks, the pet funeral industry is alive and well.

Marian made all the decisions about what she wanted for Pebbles, and handled the situation like the trooper she is. But then she came home to an empty house, and it hit her like a ton of bricks. She felt a myriad of emotions:

She felt sadness that this constant companion who had provided a connection to her beloved Bob was gone.  She expressed anger that the treatments the vet had promised would give Pebbles a year or two of life (and that had cost her a small fortune) had not worked and had caused 6 months of suffering. She tormented herself with guilt over the fact that even though she knows it was “the right thing to do”, that SHE had made the decision, that SHE had killed her cat. Had she been too hasty? Could she have done more? And above all, the loneliness of missing the comfort and companionship she had clung so desperately to after Bob died.

Let me make a confession. I never did “get” the significance of pet loss, minimizing its importance in my own mind because I have never owned a pet, my fear of animals going back to being bitten by a neighbor’s rampaging German Shepherd dog when I was 10 years of age.

Love For Our Pets

But I get it now, thanks to hearing Marian’s story. So many people get so much love and delight from their beloved pets in life, and like any significant relationship, they grieve deeply for them when they are gone. But it is more than that. People often make pets living symbols of their inner feelings: for some, symbols of their own innocence and purest feelings and the need to care; for others symbols of aggression and dominance as I personally found out at age 10. Whether positive or negative, when that pet dies a treasured secret part of the person also dies.

The Process Of Grief

I did a bit of research in the “pet loss web sites” and found that much of the advice to help people through their grief is exactly the same as what is offered when a human companion dies. Regardless, grief is probably the most confusing, frustrating and emotional thing that a person can experience. It is even more so for bereaved pet owners, when society in general does not give them “permission” to grieve openly. Consequently, they often feel isolated and alone. It is known as disenfranchised grief. Luckily, more and more resources are becoming available to help the bereaved pet owner realize that they are NOT alone and that what they are feeling is entirely normal.

As Helen Keller once succinctly put it: “What we have once enjoyed we can never lose. All that we love deeply becomes a part of us.”